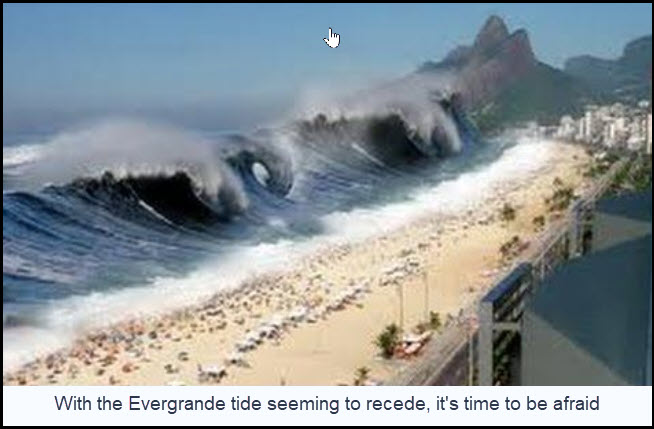 [Recently I wrote here that the world’s biggest financial institutions are in Evergrande muck up to their eyeballs, even if they claim that their exposure is small in relation to their respective assets. The trouble is, the supposed assets are as ethereal as Evergrande’s grotesquely inflated real estate holdings. In the guest commentary below, Shawn Brown, a San Francisco friend from the hedge fund world, raises the possibility that behind-the-scenes maneuvering by the Fed is attempting to shore up the financial system ahead of potentially massive Evergrande shock-waves that have yet to be felt.  RA ]

Who are the 80 Participating Counterparties in the daily $1 Tr+ Reverse Repurchase Facility, and why are almost half of the Primary Dealers foreign?  It appears Chinese real estate developer Evergrande is going to stiff offshore creditors in a proposed restructuring designed to zombify the property giant.  Is this a dry run for the Fed’s rapidly approaching hyper-hypothecated Treasuries moment?

Friday, approximately 50 unidentified counterparties had their access to daily RRP doubled from $80 Billion to $160 billion.  According to  ADVRatings.com, only seven banks in the world have a market cap greater than $160 billion, and four of them are, dubiously, Chinese.  Former NY Fed, IMF and U.S. Department of the Treasury employee Zoltan Pozsar says the counterparties are “sterilizing reserves.”  If that’s true, the Fed is about to unleash a literal tsunami of liquidity (perhaps up to $5T) heading into fiscal year end to back-stop the Evergrande contagion and subsequent flight to safety.

The Fed has a serious hypothecation problem, and it is also the reason they’re talking taper: everyone is quickly realizing Evergrande collateral is about to take a 50%+ haircut.  The Fed continues to throw shade with terms like “accommodative,” “full employment,” “low inflation,” “climate change,” Covid — and the big zinger, “managing liquidity,” to ensure the financial system is amply provisioned to prevent the plumbing from getting clogged (again). The real story is the coming HYPER-hypothecation; indeed, the Masters of the Universe may be about to pull an Evergrande, stiffing off-shore counterparties who believe their Treasuries are ‘pristine’.  Wait till they realize that supposedly pristine collateral has been pledged to dozens of (non-performing) loans, potentially forcing margin calls on some of those 50 or so foreign counterparties and their borrowers.

According to the NY Fed list of Primary Dealers, Mizuho Securities USA LLC is one of those dealers who presumably ‘sterilizes reserves’ on behalf of the Fed.  Mizuho Securities is a wholly owned subsidiary of Mizuho Financial Group and the world’s 60th largest bank by market cap, at $36.95B.  Why would a Japanese Investment bank need more than 4X their market cap in ‘reserves’ if something wasn’t completely broken in the financial plumbing?  We are in a fourth generation war, not unlike Klaus’ fourth industrial revolution.  Who was it that called these products “financial weapons of mass destruction”?